This game recreates the bitter and decisive English Civil war with historical precision. With a detailed selection of the historical units of the conflict you will find the Covenanters, Newcastle’s whitecoats, Cromwell’s Ironside’s, the New Model Army or the Cornish legendary infantry.

The King or the Parliament? This conflict confronted the King Charles I vs the Parliament, so yo must choose your side and take command of the Cavaliers armies or the Roundheads and the Covenanters. From Scotland to Dover, from Wales to Kent the counties raise their regiments to defend the King or Parliament. To remain neutral is not a choice. Manage your resources, your loyalty, your best leaders, choose your strategy and take control of key cities. Became familiar with legendary places like Bristol, York, Arundel, Nantwich, Reading, Oxford… Put them under siege or defend them sending a relief army or just find the enemy at the gates of York.

There were hundreds of regiments present in this war and the player will find a detailed selection of the historical units of the conflict like the Covenanters, Newcastle’s whitecoats, Cromwell’s Ironside’s, the new model Army or the Cornish legendary infantry. Players can build and manage their armies, throughout the campaigns set in the various theaters of operations like Yorkshire, Cheshire, Lancashire, Bristol, Lincolnshire, etc…. Ageod’s unique system of detailed strategic representation of this era’s conflicts makes the difference here your decisions will determine if you can win or become defeated.

A set of unique commanders with historical portraits and traits like the Royalist Byron, Prince Rupert, Hopton, Newcastle, King Charles or the Parliamentarians: Essex,Thomas  Fairfax, Waller,Cromwell, the Earl of Leven help you in achieving your objectives giving a unique feeling of being in command in those key days of 1642.

English Civil war covers England, Wales, Scotland and the surrounding sea regions. Two playable sides, The Royalists and the Parliamentarians. Allow represent military operations between July 1642 and end of 1646. Game map is divided into small regions as usual in Ageod games, with a variety of terrain, climates and development level to represent correctly the countries represented (England, Scotland, Wales and Ireland). Several historical cities represented as Bristol, Hull, York, Arundel, Portsmouth, Chester… Scenarios: 6 in total, with 3 tutorials, 1 Great Campaign covering the whole conflict and 2 more covering the war from later starting points to the end of 1646 including the Marston Moor and Naseby campaigns.

All the great leaders of this war, Cromwell, Essex, Faifax, Hopton , Charles I, Prince Rupert, etc… are well represented with historical portraits, strategic abilities and traits. Great detailed units representing the regiments of both sides, their strength, historical names, origin and a nice representation of this era uniforms. You could manage the Ironsides, the Cavaliers horse regiments, The Newcastle’s Whitecoats, The irish regiments, The covenanters, Trained Bands, etc… The navy, not so relevant in this conflict, is as well represented with historical  warships.

Control your factions spending wisely your resources to create new troops and pay the cost of your army, take control of key industrial cities and their production centers.

Each side has a geographical stronghold. The royalty’s includes the countryside, the shires, the cathedral city of Oxford, and the less economically developed areas of northern and western England. Parliament’s spann the industrial centres, ports, and economically advanced regions of southern and eastern England, including the remaining cathedral cities (except York, Chester, Worcester). 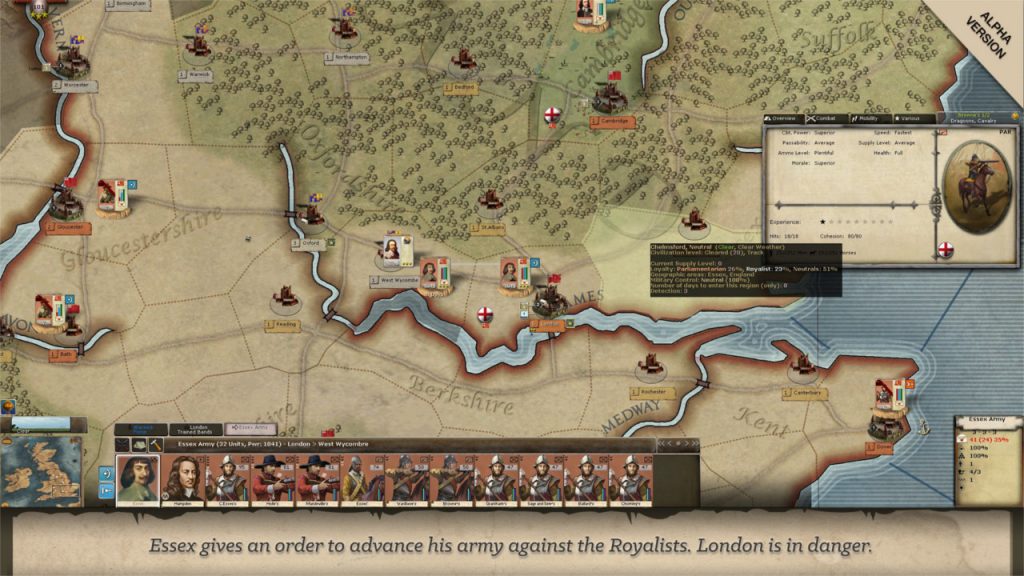 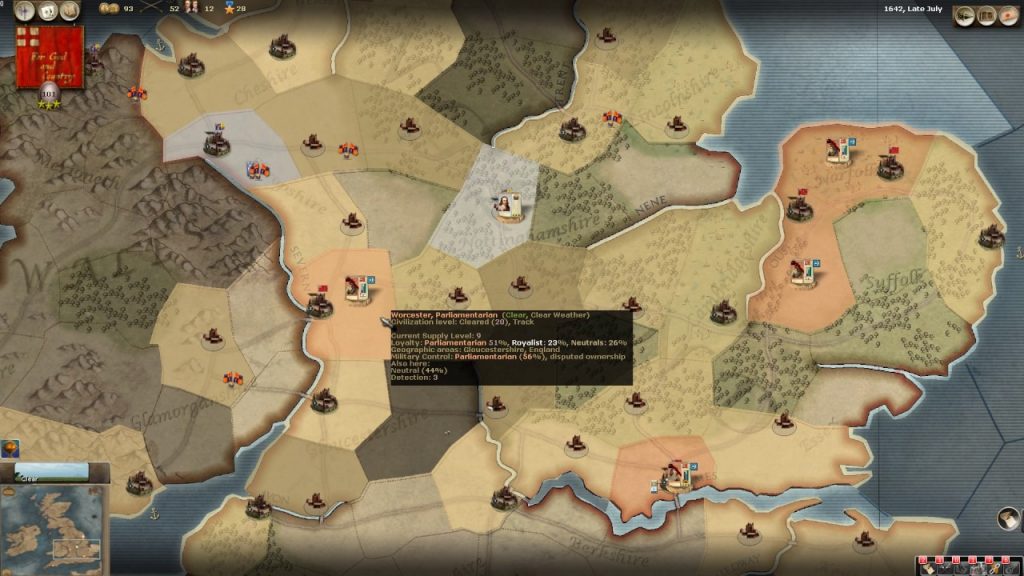 Other Headquarter's designs under ageod system: